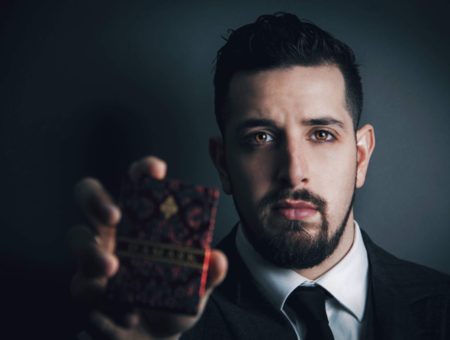 Being a mystery entertainer, Daniel is both a magician & a mentalist who brings stimulating high-end entertainment & interaction to ANY social event or setting.

Based out of NYC, Daniel services individuals, corporations, and celebrities coast-to-coast & internationally WORLDWIDE.

WHEN YOU BOOK DANIEL YOU DON’T GET A ONE-SIZE-FITS-ALL SHOW. HE WORKS WITH YOU TO BUILD AN EXPERIENCE TAILOR-MADE FOR YOU AND YOUR GUESTS!

THE BIRTH OF A PASSION:

Daniel has been surrounded by magic all of his life! His parents hired a magician to perform for his family and friends at his 1st birthday party. He was already a student of sleight of hand by the age of 6. After learning his first trick with his father a year earlier – he was instantly HOOKED! He spent days in the library and took home every book he could find on the topic. He would learn a trick, practice it, and then demonstrate it over and over again for family and friends.

In middle school and high school Daniel was synonymous with magic. He would have crowds of students AND teachers around him in the hallways in between classes, and after school – always bringing a smile, and some wonder to anyone who was willing to share these moments.

A few years later Daniel went to college completing engineering degrees and certifications which ultimately led him to an amazing career as a lead project manager with a fantastic firm in the field.

Suffice it to say, the MAGIC NEVER LEFT and on his 24th birthday he decided to leave a prosperous career behind to pursue his one true passion becoming a full time entertainer – and that fire is the secret ingredient to what has fueled Daniel’s rapid growth to then becoming a top performer in his industry to this day.

Ever since then Daniel has spent his lifetime perfecting his craft and his passion. He has performed for crowds as large as the thousands, to small intimate groups. He has performed for The New York Yankees, Apple, the Aria Nightclub in Las Vegas, someone like you, and much much more. Daniel’s love for the art of magic is truly reflected in everything he does.